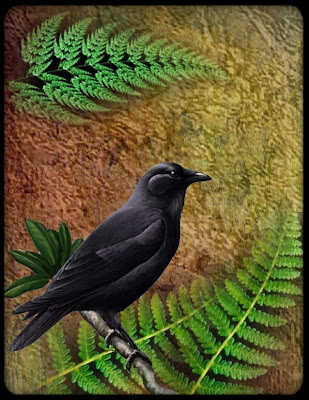 An interesting background challenge this week. I took mine to the great outdoors, and used one of my favorite public domain raven images. Check here for all the beautiful entries. Thanks for stopping by!
Posted by indybev at 6:16 AM 17 comments: 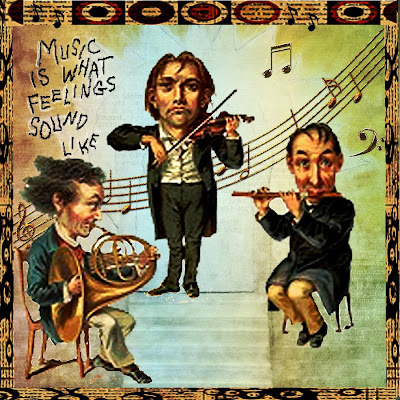 Marie has chosen music for the theme at 3 Muses this week. My musicians are from Flickr Collage Images, SuzieQ, altered somewhat. Background is from CreateWings. I forgot to note the origin of the borders (sorry). I know the artists at 3 Muses will be making sweet music this week! Thanks for stopping by, guys! 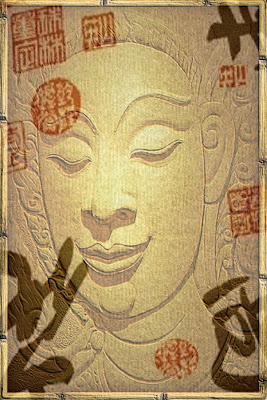 Sunday Postcard has challenged us to do something in Oriental style. After some failed attempts to do a "zettiental", I came across this lovely Oriental image at Flickr Collage Images (Tanakawho), and combined it with a googled Oriental fabric overlay and a bamboo frame. Thanks, ladies. It was a fun challenge!!

Black, White and Red, the challenge this week at Theme Thursday. These colors are always such fun to work with for me. My first thought is always cardinals in the snow, but it's Spring, so I let the cardinal rest!! Thanks for looking.
Posted by indybev at 7:08 AM 15 comments: 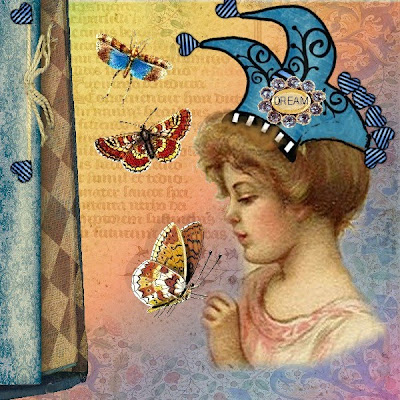 I liked Ann's challenge of hats, wings and things. Here's my interpretation, with the help of Lorie Davison of SBG, and an image from SuzeeQue, the beloved generous member of Flickr Collage Images who lost her battle with cancer last week. Credit to Fidlette for the jester hat. Thank you for visiting my blog! 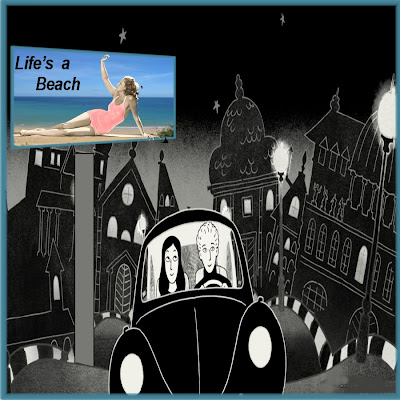 Collage Obsessions has given us a bathing beauty image to work with this week, and the word "beach". I put her on a signboard in a cityscape. (I can't remember who to credit with this cityscape. Sorry). Thanks for looking, blog friends! 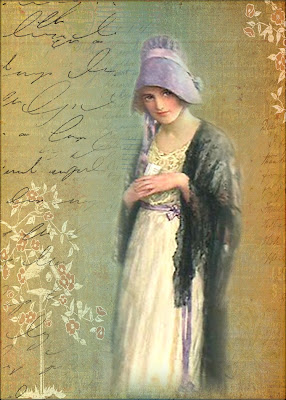 So beautiful and demure, this young lady seems deep in thought. Thanks so much for letting us feature her in our art this week! Credit to Christine Renee Designs and Lauren Bavin for overlay. Both are layered over my own background. Thanks for looking in! 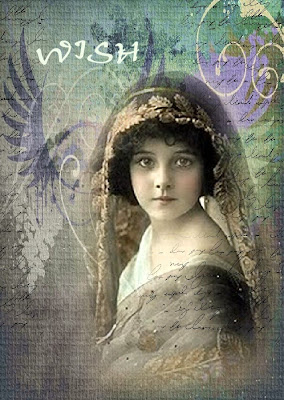 The image we're given this week at Art Creations is spellbindingly beautiful. I've placed her on a background by Rubyblossom, and used a script overlay. Thanks, ladies, for this gorgeous image, and thanks, blog friends, for stopping by! 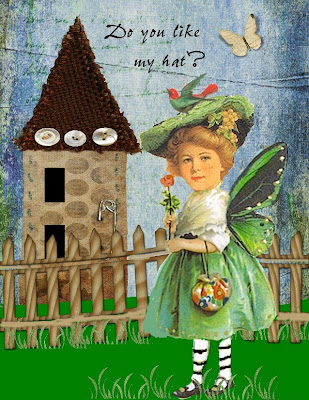 Kelly and Ann are thinking alike. Three Muses sneak peek last night was Hats and Crowns, Wings and Things, and today Kelly's challenge is Hats and Crowns! Talk about coincidence! There should be enough hats and crowns to go around, though. I've given my wee lassie a chic hat and sent her for a walk in her neighborhood. Credit to Create Wings Designs and Flickr Collage Images. Thanks for stopping by! 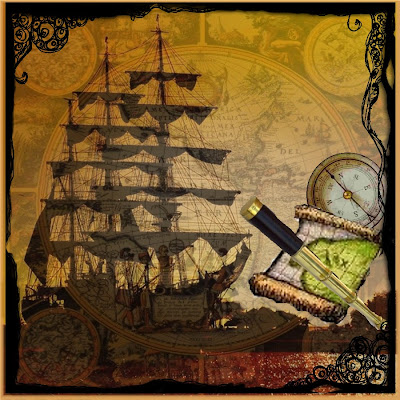 I've always been fascinated with stories of treasure maps, buried treasure and sunken ships laden with riches unimagineable. I was fortunate to see some of the loot brought up from the wreckage of The Atocha off the coast of Florida, some of which is in Mel Fischer's museum in Key West. The story of the Spanish galleons that went down off the coast of Florida is sure to attract treasure-seekers for years and years to come. Thank you for indulging me!
Posted by indybev at 6:06 PM 21 comments: 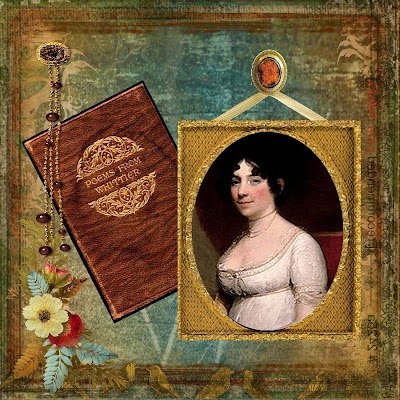 Our theme at Mixed Media Monday is to be "Hello Dolly". I decided to honor the wife of our fourth president, Dolley Madison. Dolley's first husband and a son died of yellow fever, and she later married James Madison, who was 17 years her senior. Dolley later also filled the role of hostess for President Thomas Jefferson, who was a widower. She was a strong woman, who left her mark on U.S. history. Hello, Dolley!!! 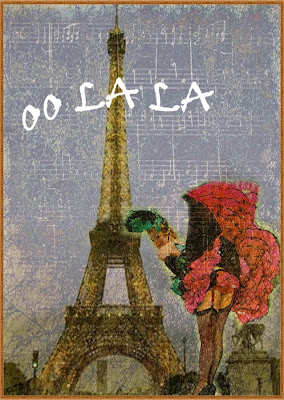 "Oo la la, Paree"! Who can think of Paris without it's famous landmark, and it's Moulin Rouge can-can dancers! I used a couple of googled images, and a grunge overlay from Rubyblossom for this tribute to Paris. Thanks for having a look! 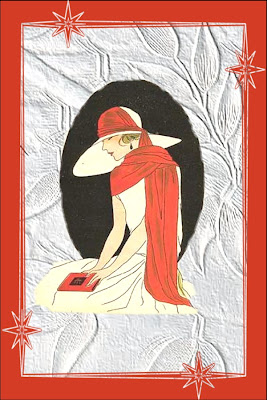 The yummy embossed white background provided this week gave me a chance to use my favorite black, red and white. The art deco image is public domain. Thanks for stopping by! 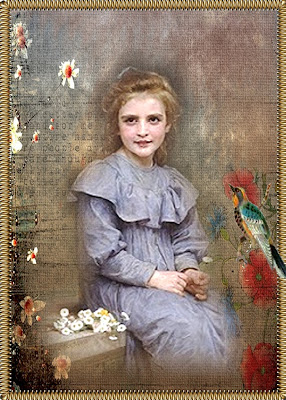 This beautiful little lady is the image given us this week by Art Creations. The background is a generous freebie from Rubyblossom, and the bird is from Karen's Whimsy. The border is from my Digital Image Pro software. I enjoyed working with this image. Thank you for looking!

Theme Thursday asked us to work small this week. I did a pair of thrinchies (3-inchies) It's fun working in the smaller size for a change. The beautiful backgrounds in these pieces are from Playing with Brushes (thank you so much for your generosity). The "ladies" are public domain images. Thanks for stopping by!
Posted by indybev at 3:27 PM 17 comments: 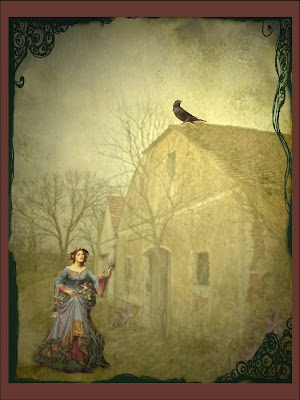 "Blackbird singin' in the dead of night...." This phrase came to mind even before I read Marie's sneak peek last week. I found my cottage as a stock photo, used an overlay from Skeletalmess, and the lady is from a John William Waterhouse painting. Great challenge, Marie, and great example you've given us! 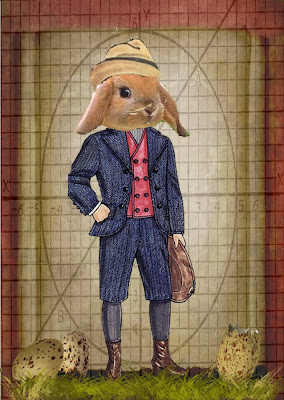 It is so much fun to do composite people! Here's my dapper Rabbit O'Hare. Thanks and HAPPY EASTER! Credit for the background to Chrysti's Free Textures, the grid overlay is mine, the eggs are Rian freebies, and the grass is from CreateWings Designs. O'Hare's body is from Flickr Collage Images, and that sweet face was googled.
Posted by indybev at 6:37 PM 31 comments: 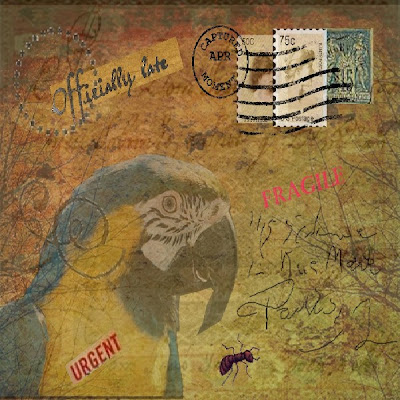 I'm a big fan of the king of mail art, Nick Bantock. This is after his style. I always enjoy creating mail art. Thanks for the challenge!
Posted by indybev at 3:40 PM 14 comments: 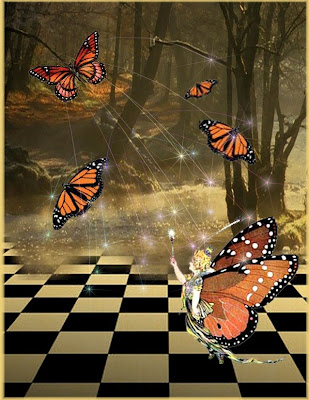 Butterflies are always a bit of magic to me. Credit for the background is to Rubyblossom, and the butterfly fairy is from Karen's Whimsy. She seemed good company for the beautiful butterfly image we're given by Art Creations this week. Thanks for stopping by! 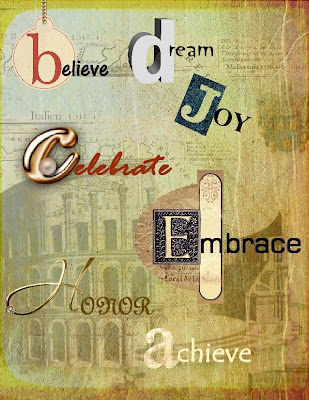 A few of my favorite letters. Background is a Cemerony freebie (thank you!). Thanks for a fun challenge, and thanks to my blog friends for taking a peek!
Posted by indybev at 7:12 AM 18 comments: