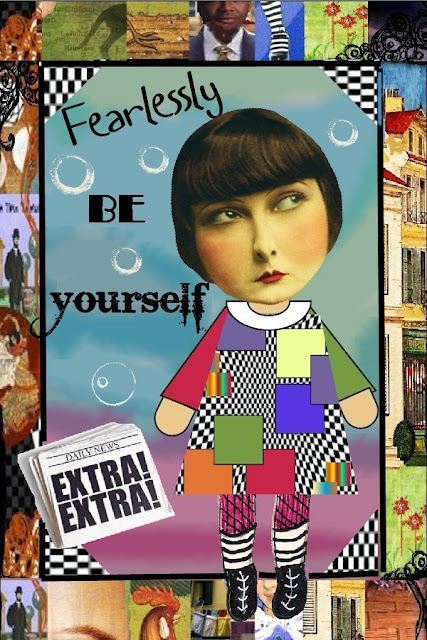 One of life's difficult lessons is to learn not to let what others think influence who we are.   Sometimes you just simply have to be fearless to hold on to who you are.  There are so many influences in our materialistic world.   "If I am what I have, and I lose all I have, who, then, am I?" (Erich Fromm)    This fearless little lady is made up of bits and pieces of former art, with a face from Tumblefish Studios (Thanks, Marsha!).
Posted by indybev at 1:54 PM 26 comments: 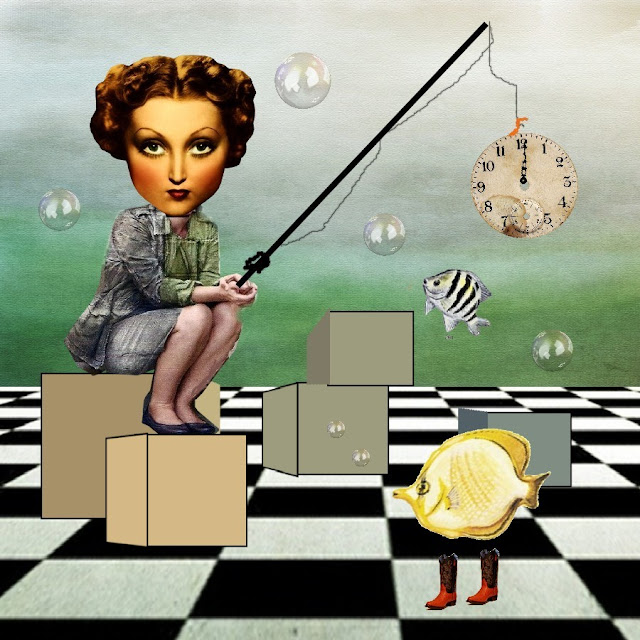 Background is a combination of two from Rubyblossom.  I "constructed" the boxes.  The fisherwoman's body is from a magazine, her face from Tumblefish Studios,  the clock from Jenn U Designs, and the fish from Dover.   It took some TIME to put it all together......YUK YUK!
Posted by indybev at 8:14 AM 21 comments: 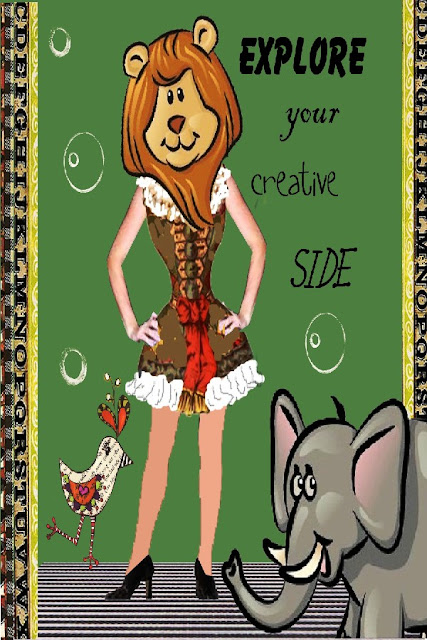 I took a zetti look at the animal kingdom challenge at Sunday Postcard this week.   Bird is a freebie from the ever so generous Terri Karr,  animals are from one of my softwares, other bits and pieces from my stash.  This was fun!   Thanks for stopping by.
Posted by indybev at 11:29 AM 12 comments: 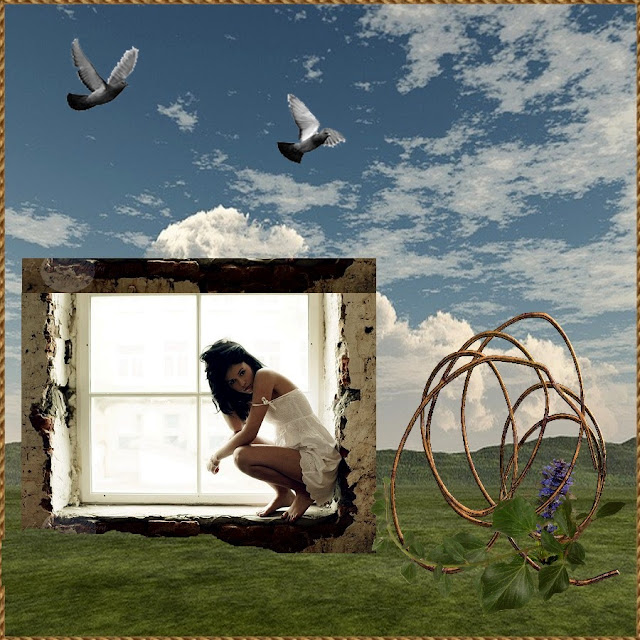 My Muse sort of took over on this one.  Don't ask me what the message is!!   Background is by MaggieMe  and some elements from Holliewood Studios.
Posted by indybev at 6:20 PM 21 comments: 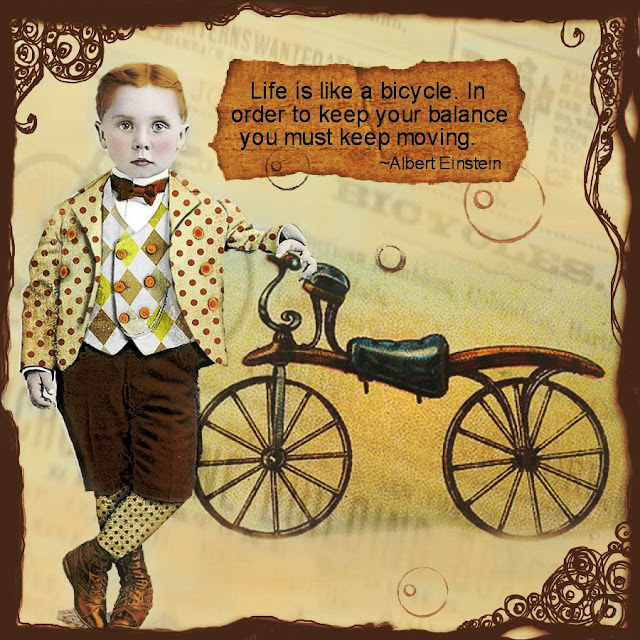 Oldfashioned is the word of the week at Take-a-Word.   My bicyclist is a freebie from the ever-generous and talented Land of Nod (thank you SO much!).  Bicycle and ad were googled.  Frame is from my long-ago stash and source is lost in the pages of time.    When I was a child, one of my favorite pasttimes was riding my bike down country roads past fragrant fields of new mown hay, with the evening breeze in my face.   I wish I could bottle that experience, and take a nip now and then!!
Posted by indybev at 9:52 AM 17 comments: 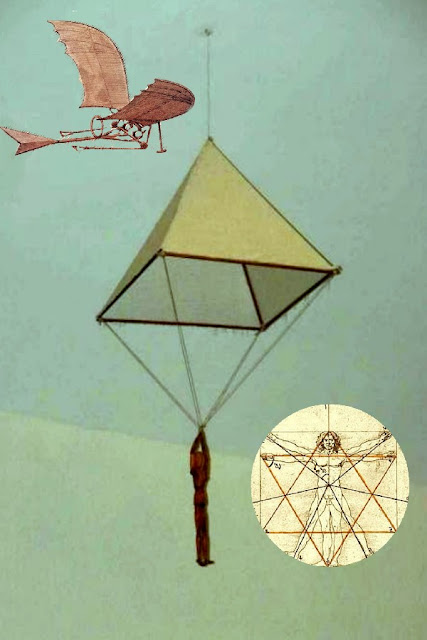 Sunday Postcard challenge this week is Leonardo Davinci.   Aside from his painting, Leonardo was known for his inventions and sketches.  I've chosen two of his inventions, and a medallion sketch of his fascinating Vitruvian man.  I thought they made for interesting page design.    Thank you for stopping by!
Posted by indybev at 12:36 PM 11 comments: 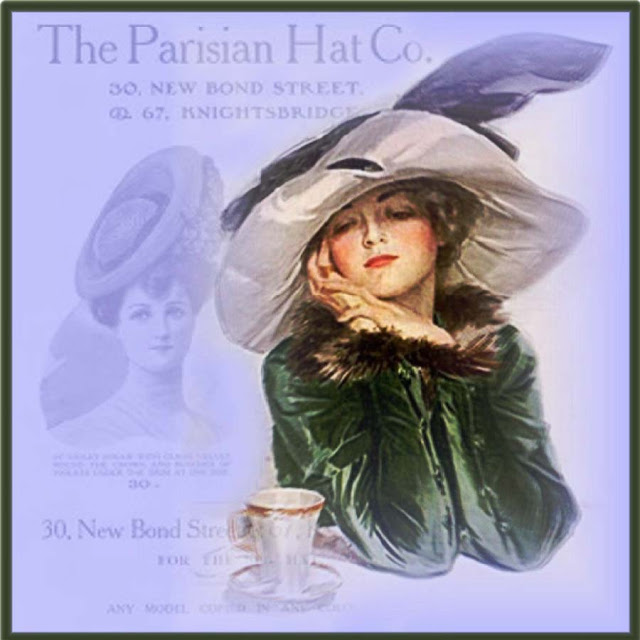 Ann has chosen "Hats" as the theme at Three Muses this week.   I've always been partial to the beautiful hatted ladies by Harrison Fisher, who did many illustrations for Cosmopolitan and books in the early 1930's.    Books illustrated by Fisher are highly collectible.    The image above is a Fisher illustration, and the background is from Flickr Collage Images.   Thanks for stopping by!
Posted by indybev at 10:59 AM 19 comments: 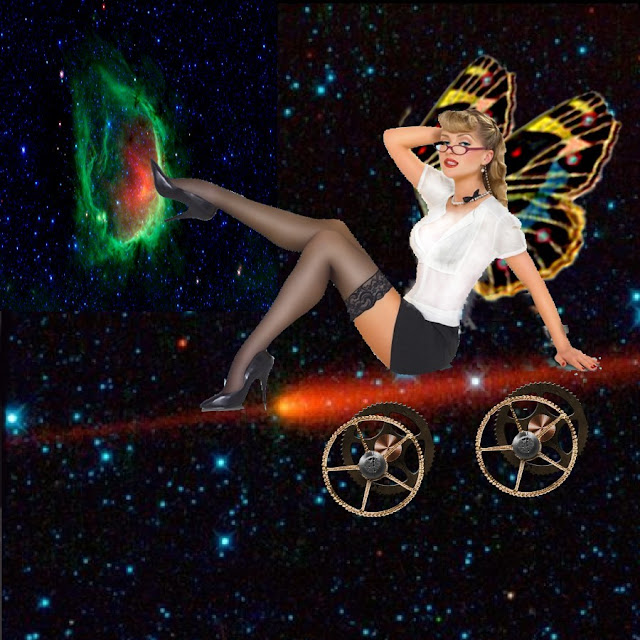 Deann's challenge word this week is Celestial, so I decided on some celestial cheesecake!   I used a couple of photos from NASA, wheels from Maya at SBG, and the lady riding the shooting star is from a vintage magazine cover.  Thanks for looking.
Posted by indybev at 2:07 PM 22 comments: 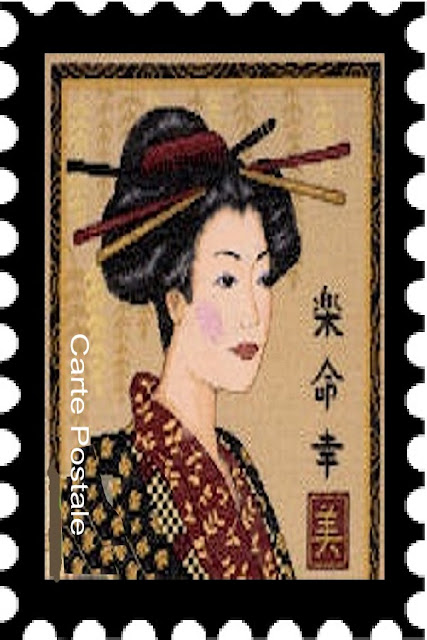 Sunday Postcard is taking us to the Orient this week.   I decided to make my entry into a stamp.  Thanks, ladies, for a fun challenge.
Posted by indybev at 11:16 AM 13 comments: 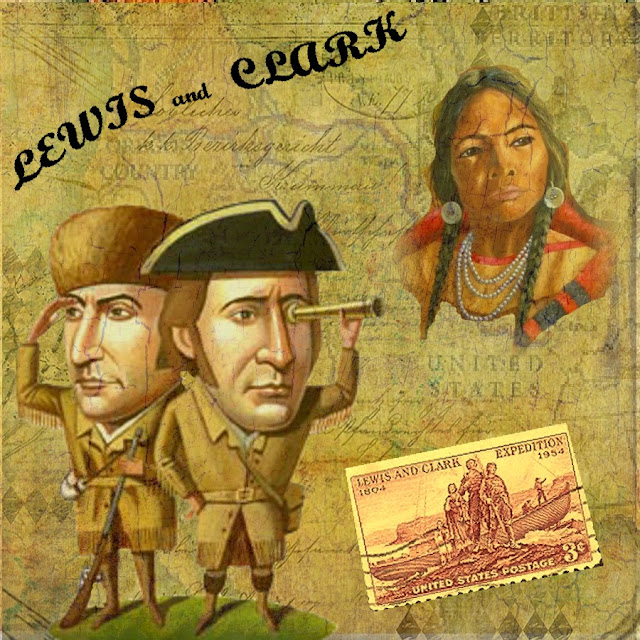 In May, 1804, Meriwether Lewis and William Clark set out on an amazing expedition across the Louisiana Territory. These true American heroes faced unknown people, harsh conditions and unexplored lands to secure a place in history as two of the world's greatest explorers. The expedition traveled over 8000 total miles over a period of 2 years, 4 months and 10 days.  When the expedition reached the Pacific the party voted on where to spend the winter. York, Clark's slave, is allowed to vote, nearly 60 years before slaves in the U.S. would be emancipated. Sacagawea is also allowed to vote, more than a century before either women or Native Americans are granted full rights of citizenship.

Then president, Thomas Jefferson purchased the Louisiana Territory, 820,000 square miles, for $15 million. After interest the final total came to be $27,267,622. That still works out to be only about 3¢ an acre!   Thanks, Lewis and Clark!

Credits:  All images are from net-surfing.   (Any resemblance of Merriweather's body and that of my pirate in an earlier piece is purely coincidental.....)
Posted by indybev at 1:48 PM 16 comments: 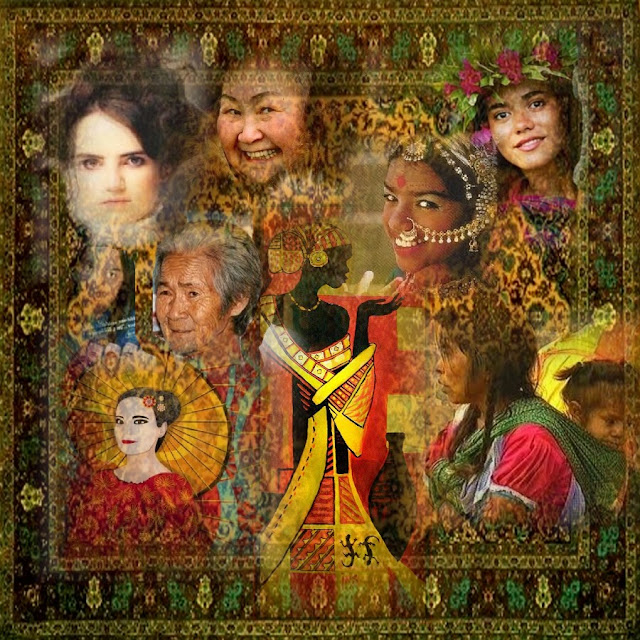 Thomas Browne said, "It is the common wonder of all men, how among so many millions of faces, there should be none alike."   Did you ever sit in a busy airport or shopping mall and wonder at the different faces.   How can it be they are never replicated?    Red, yellow, black, brown, white, old, young, smiling, solemn, yet each a unique individual.   One of my favorite quotes is by Anthony Rapp...."There is only one you for all time.  Fearlessly be yourself."
Credits:  The background for this piece is a Persian carpet, and the faces were found web-surfing.
Posted by indybev at 9:46 AM 18 comments: 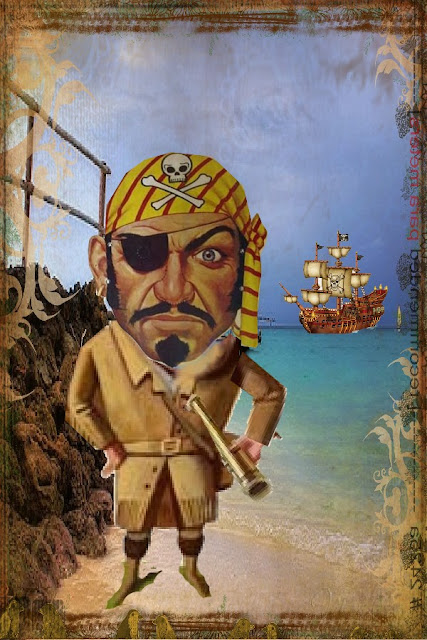 Avast ye hearties!!   The ladies of Sunday Postcard have given us "pirate" as a challenge.   My background, body and pirate ship were googled, the face is from a Cornflakes box, the frame is from B. Datema at SBG.
Thanks for stopping by!
Posted by indybev at 4:28 PM 15 comments: 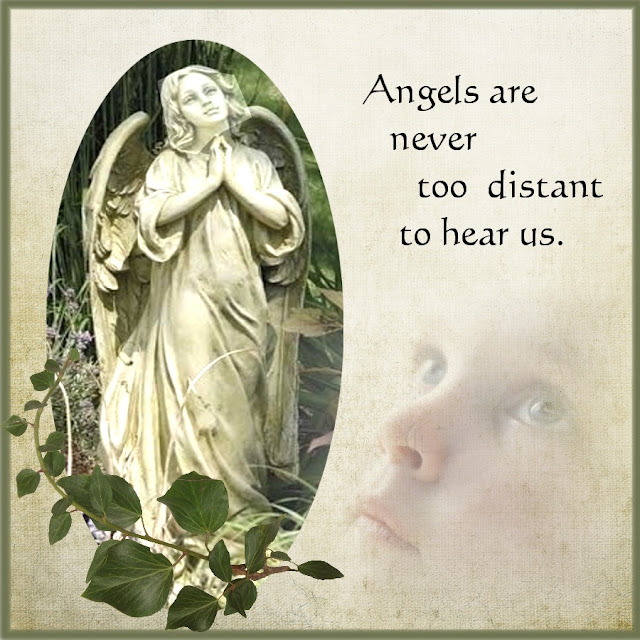 Angels are thought to be creatures of good and spirits of love.    Some believe there are guardian angels who look after us.   Isn't that a comforting thought?    I like to think angels look after the sweet, pure spirit of children.
Posted by indybev at 2:00 PM 20 comments: