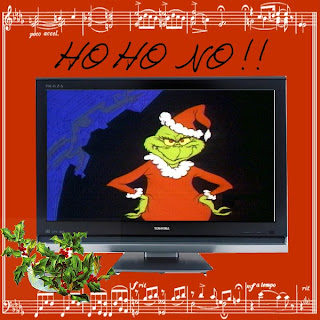 If there breathes a soul in the U.S. who hasn’t heard of the advent of HDTV in February, I applaud their lifestyle! As for the rest of us, we are reminded numberless times daily that February will see the end of analog TV, and our old television sets will only bring us endless snow. We must buy a new LCD-HDTV or a converter box if we wish to continue our television addiction. I am one of the last two people in the universe who does not have cable. I operate with rabbit ears,--quite successfully, I might add. A year and a half ago, I thought to get a step up on this madness, and purchased a new HDTV-ready set, so I’ve been feeling quite smug. Until a week or so ago. My Toshiba (a pox on them) locked in on a station and sat there in a fit of obstinance, not to be outsmarted by my remote OR the on-set controls. It would not change channels. It would not turn off. It turned a deaf ear and blind eye to my calisthenic histrionics. It was necessary to resort to the famous techno-nerd solution to all problems technical----stand on my head behind the entertainment center, sort out the maze of wires, unplug it and plug it in again. Sneezing from displaced dust motes, I was pleased to find whatever constipatory (MY word, like it?) process that caused failed movement seemed resolved. Once more I ruled my little technical world! This has been sporadic, however, and the entire process has been repeated at least once daily, much to my chagrin. In the true spirit of the season, thoughts of Peace on Earth Goodwill to Man wend their way through my head……to the exclusion of Toshiba. Whatever happened to Sylvania and Magnavox?